eRemedies are based on a provisionally patented system technology based on homeopathic principles. Homeopathy is a two-century-old system of medicine famous throughout the world for nontoxically treating both acute and chronic conditions. It depends on consultation with a highly trained, certified and licensed professional who focuses on what is unique about each individual patient, regardless of diagnosis.

Obviously, Coherence Apps LLC cannot substitute for professional treatment. Its eRemedies are merely used as supportive help in sudden onset situations when professional care is not available. Nevertheless, some sudden conditions are clear enough that homeopathic support can be useful.

Homeopathy is a highly systematic, scientific system of medicine developed over 200 years ago in Germany by Samuel Hahnemann, the medical genius of his age. The fundamental principle is that healing energies can be extracted from many kinds of substances in nature - minerals, plants, animal products, even bacteria or forms of energy.

Every person, regardless of ailment, has strong sensitivity to a particular substance in nature (or perhaps a few related substances). Homeopathy has created very detailed personality descriptions in its extensive computerized databases, so the challenge of the practitioner is to find which remedys energy will fit most precisely to the individual patients unique personality.

Homeopathy became famous throughout the world for treating acute epidemics: scarlet fever, cholera, yellow fever, influenza, typhoid, malaria, even tuberculosis. During intense acute epidemics such as scarlet fever or influenza, symptoms are pretty much the same for each sufferer. Hence, individualization is not as important as in the rest of homeopathic practice. Commonly there is a genus epidemicus remedy which works for practically everyone, not only for treating the particular ailment but also as a preventative.

What makes homeopathy very safe is the way remedies are prepared. The original substance is put in solution, then the solution is prepared in a government accredited and monitored laboratory by a specific method: an automated machine pounds the solution vigorously, dilutes it, pounds that vigorously, dilutes that. This continues past the point at which there is no molecule left of the original substance!

A common criticism of homeopathy is the fact that the remedies are made past there being even a molecule left. How could it work if there is no chemical? Well, there is a well-documented scientific answer.

When something is in solution, water molecules form shells around the individual ions and molecules of the original substance. This is how it is kept in solution. Vigorous pounding breaks these water molecule shells into small nanometer-sized clusters. When they are diluted (by serial dilutions), their size increases. The more the solution is pounded and diluted, the more these clusters are created. Most importantly, these clusters carry the same energy as the original substance, because that is how the clusters formed in the first place!

Clusters have been viewed by electron microscope, measured in size by Atomic Force Microscopy, defined spectrophotometrically, and been validated by innumerable scientific studies clinically.

Hence, homeopathic remedies are an elegant way of getting rid of the original substance while putting its energy into the water as a vehicle. And, this elegant process has been used for over two centuries!

One of the most impressive studies proving the electromagnetic nature was published by Endler et al in 1998. A sequence of studies showed the impact of a remedy on the development of tadpoles (compared to controls, of course). 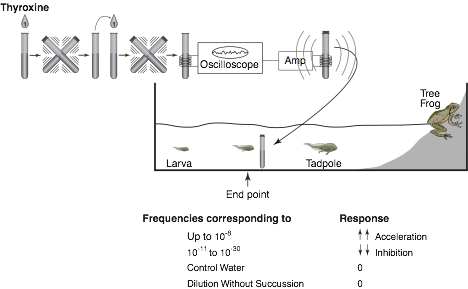 Another striking experience was by Jacques Benveniste of France. He had shown that homeopathic remedies with no molecule in the solution can affect the output of a guinea pig heart in a standard immunologic laboratory setting.

Similar to Endler (above), he acquired and amplified the signal by placing the remedy inside an electrified coil.

He then made a MP3 file of the digitized signal and sent it via Internet from Lyons, France, to Chicago, Illinois, where the signal duplicated the effect with another guinea pig heart setup.

As described, the energetic signal in homeopathic remedies can be extracted via a device consisting of a simple coil connected to an amplifier and digitizer, and the resulting signal can be stored on a computer as a .wav file or a MP3 file. This technique was developed originally in the 1990s by Jacques Benveniste, a French researcher doing immunology research. He demonstrated this in repeated laboratory experiments.

Of course, homeopathic principles require choosing the correct remedy in a given sudden onset situation, so Coherence Apps LLC has taken the next step and designed eRemedy selection based on homeopathic principles. This entails answering very detailed and specific questions; the resulting pattern of answers is unique and individualized to the user; the algorithmic engine then selects and plays the appropriate eRemedy. The process of creating eRemedies and then using them on humans via cellphone or computer (as opposed to limiting their use to laboratory experiments) has now been patented by Coherence Apps LLC.

The current device is diagrammed: 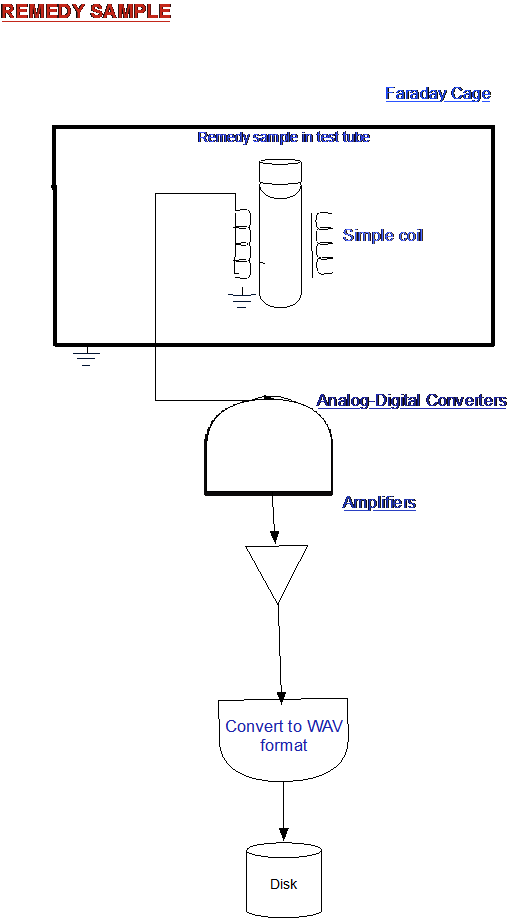 In addition to this device, we are working toward a device that should isolate the eRemedy signal from background noise of distilled water, test tube, coil, and Faraday cage, etc. by running the same process in parallel and subtracting background signals from remedy signal. Such enhancement isolates the remedy signal for amplification and digitization. It is anticipated that such eRemedies should have greater clinical benefit when selected by algorithms for individualization to the user. Such a device is depicted here: